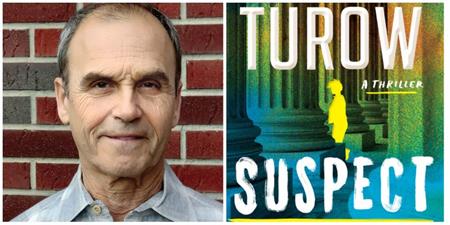 The Book Stall (811 Elm Street in Winnetka) is delighted to welcome best-selling author Scott Turow in conversation with bookseller Jon Grand on Tuesday, October 11 at 6:30 pm. They'll be discussing Mr. Turow's latest novel, Suspect. The Washington Post says, “Scott Turow is a master of the legal thriller." (And we completely agree!) This program is free and open to the public, but registration is required. Please visit the Book Stall website to reserve your spot. Please purchase your copy of Suspect from The Book Stall.

More About Suspect: The #1 New York Times bestselling author of Presumed Innocent and The Last Trial returns with a riveting legal thriller in which a reckless private detective is embroiled in a fraught police scandal.

For as long as Lucia Gomez has been the police chief in the city of Highland Isle, she has known that any woman in law enforcement must walk a precarious line between authority and camaraderie to gain respect. She has maintained a spotless reputation--until now. Three male police officers have accused her of soliciting sex in exchange for promotions to higher ranks. With few people left who she can trust, Chief Gomez turns to an old friend, Rik Dudek, to act as her attorney in the federal grand jury investigation, insisting to Rik that the accusations against her are part of an ugly smear campaign designed to destroy her career and empower her enemies--both outside the police force and within.

Assisting Rik on the case is Clarice "Pinky" Granum, who spent most of her youth experimenting with an impressive array of drugs and failing out of various professions, including the police academy. Guided by her gut instinct and razor-sharp investigative skills, Pinky dives headfirst into a twisted scandal that will draw her into the deepest recesses of the city's criminal networks, as well as the human mind. But she will need every scrap of tenacity and courage to unravel the dark secrets those closest to her are determined to keep hidden.

More About the Author: Scott Turow is the author of many bestselling works of fiction, including The Last Trial, Testimony, Identical, Innocent, Presumed Innocent, and The Burden of Proof, and two nonfiction books, including One L, about his experience as a law student. His books have been translated into more than forty languages, have sold more than thirty million copies worldwide, and have been adapted into movies and television projects. He has frequently contributed essays and op-ed pieces to publications such as The New York Times, Washington Post, Vanity Fair, The New Yorker, and The Atlantic.

The Book Stall is an independent bookstore and cultural institution on Chicago’s North Shore. We’re known for our great selection of books, cards, and gifts, as well as our long-running author event series. Learn more at www.thebookstall.com.

Suspect: A Conversation with Author S...