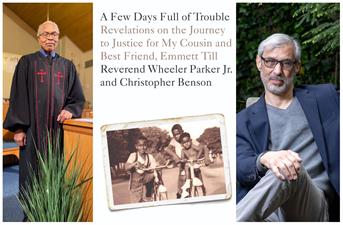 An Evening with Rev. Wheeler Parker and Christopher Benson (In Conjunction with the Winnetka Congregational Church)

The Book Stall is pleased to partner with The Winnetka Congregational Church (725 Pine Street) on Tuesday, February 28 at 6:30 PM as they welcome Reverend Wheeler Parker, Jr., author of the powerful new book, A Few Days Full of Trouble: Revelations on the Journey to Justice for my Cousin and Best Friend, Emmett Till. In a hypnotic interplay between uncovered facts and vivid recall, the last surviving eyewitness to the lynching of Emmett Till tells his story, with moving recollections of Till as a boy, critical insights into the recent investigation, and powerful lessons for racial reckoning. Rev. Parker will be in conversation with his co-author Christopher Benson, with a book signing to follow the talk. This event is free and open to the public.

More About the Book: In 1955, Emmett Till was lynched when he was 14 years old. That remains an undisputed fact of the case, which ignited a flame within the Civil Rights Movement. Yet the rest of the details remain distorted by time and too many tellings. What does justice mean in the resolution of a cold case spanning nearly seven decades? In A Few Days Full of Trouble, this question drives a new telling of the story of Emmett Till, relayed by his cousin and best friend, the Reverend Wheeler Parker, Jr., a survivor of the night of terror when 14-year-old Emmett was taken from his family’s rural Mississippi Delta home in the dead of night.

Rev. Parker offers an emotional and suspenseful page-turner, set against a backdrop of reporting errors and manipulations, racial reckoning, and political pushback, accompanied by never-before-seen findings in the investigation. A Few Days Full of Trouble is a gift to readers looking to reconcile the weight of the past with a hope for the future.

More About the Authors: Reverend Wheeler Parker, Jr. is the pastor and district superintendent of the Argo Temple Church of God in Christ in Summit, Illinois, the church built by Alma Carthan, grandmother of Emmett Till. A sought-after public speaker, Rev. Parker lectures and teaches on the history of the struggle for equal justice in America. He has enjoyed more than fifty years of marriage to his wife, Dr. Marvel Parker.

Christopher Benson is an award-winning lawyer, journalist, and associate professor at Northwestern University's Medill School of Journalism. He co-authored, with the late Mamie Till-Mobley, the Pulitzer Prize-nominated, Robert F. Kennedy Award-winning Death of Innocence. He was Washington Editor of Ebony and has contributed to Chicago magazine, the Chicago Tribune, the Chicago Sun-Times, The New York Times, HuffPost, and The Chicago Reporter. He also received two regional Emmys and a Peter Lisagor Award for exemplary journalism for his work on the documentary Paper Trail: 100 Years of The Chicago Defender.

An Evening with Rev. Wheeler Parker a...