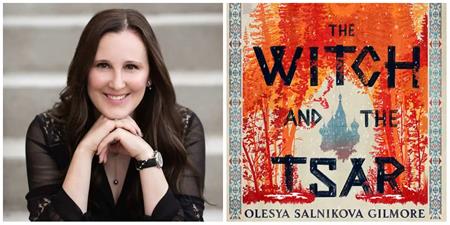 The Book Stall (811 Elm Street in Winnetka) welcomes local Highland Park author Olesya Salnikova Gilmore for an open house to present her new book, The Witch and the Tsar. Olesya Salnikova Gilmore will be greeting fans and signing books from 1:00 to 3:00 pm on Saturday, September 24. In her stunning debut novel, the maligned and immortal legendary witch known as Baba Yaga will risk it all to save her country and her people from Tsar Ivan the Terrible and the dangerous gods who seek to drive the twisted hearts of men. As Booklist says, her book is “a rich and well-woven story centered on subverted folklore played out against the backdrop of historical events. The Witch and the Tsar is not to be missed.”

More About The Witch and the Tsar: As a half-goddess possessing magic, Baba Yaga is used to living on her own, her prior entanglements with mortals having led to heartbreak. She mostly keeps to herself in a hut in the woods, letting those in need of healing seek her out. When her old friend Anastasia, now the wife of the Tsar, and suffering from a mysterious illness, arrives in her forest desperate for her protection, Yaga realizes the fate of all of Russia is tied to Anastasia. Yaga must step out of the shadows to protect the land she loves.

As she travels to Moscow, Yaga witnesses a sixteenth-century Russia on the brink of chaos. Tsar Ivan the Terrible grows more volatile and tyrannical by the day, and Yaga believes Anastasia is being poisoned by an unknown enemy. But what Yaga cannot know is that Ivan is being manipulated by powers far older and more fearsome than anyone can imagine.

Allison Epstein, author of A Tip for the Hangman, states,“Fierce and fearless, The Witch and the Tsar whisks the reader back to a 16th-century Russia that's enthralling, frightening, and completely unforgettable. With stunning prose and sharp insight, Olesya Salnikova Gilmore conjures up a captivating battle between gods, emperors, and folkloric spirits, led by a prickly, powerful heroine who leaps off the page and refuses to be ignored. This is Baba Yaga like you've never seen her before, and you're going to love her.”

About the Author: Olesya Salnikova Gilmore was born in Moscow, Russia, raised in the U.S., and graduated from Pepperdine University with a BA in English and Political Science. She went on to graduate from Northwestern School of Law with a JD and practiced litigation for a big law firm before pursuing her dream of becoming an author. She is most happy writing historical fiction and fantasy inspired by Eastern European folklore, and The Witch and the Tsar is her debut novel.